Currently sitting at below USD$0.75, the Australian dollar has reached its lowest point in six years. What are the implications for the Australian property market and renovation costs?

The team at comparison website finder.com.au have put together a great piece that explains the pros and cons and how the dollar impacts housing:

The Australian dollar’s sharp decline may favour residential construction and domestic suppliers, but Australian businesses or renovators that rely heavily on imported construction materials should expect price increases in the short-medium term.

According to analysis by the HIA Economics Group, the depreciating domestic currency will result in more expensive imported goods, which means renovators may want to avoid importing goods from offshore suppliers if they want to cut costs.

In recent months, the Australian dollar has depreciated drastically against currencies of its core trading partners, notably the US dollar. Falling from USD$0.94 in September 2014 to USD$0.78 in August 2015, AUD$1 is now worth just USD$0.73, which represents a historic low.

Prompted by plummeting commodity prices and low interest rates, the Australian dollar is now considered one of the most volatile global currencies and is expected to sink even lower than its current value of USD$0.73. 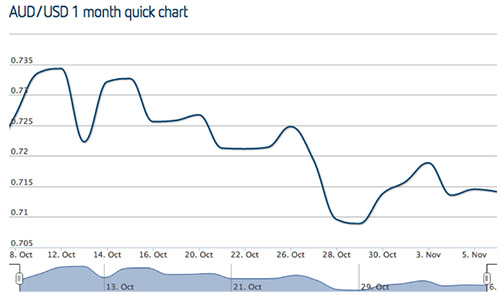 Pros and cons of a low Australian dollar

What has contributed to the depreciating Australian dollar?

Generally, movement in the dollar is influenced by commodity prices and movement in foreign currencies, overseas markets and interest rates.

How will a weaker Australian dollar impact renovation costs?

A 2013 study by Homesafe Group found that fluctuations in the Australian dollar can increase home renovation costs by 5-10% on average. This means that you may need to adjust your budget accordingly to compensate for the higher cost of imported goods, such as electrical fittings and air conditioners.

How will a depreciating Australian dollar impact construction activity?

When the dollar is low, our exports become cheaper for foreign countries to buy, but our imports become more expensive.

A weaker dollar will result in higher prices for imported goods, which means that household incomes will suffer in terms of purchasing power for construction inputs. This is likely to weaken demand for home building and renovation activity in the short term.

However, these higher construction costs may be offset by record low interest rates of 2.0% which provide borrowers with increased borrowing capacity as well as greater access to finance, such as construction home loans or personal loans. It’s predicted that there will be increased activity for renovations and new builds throughout the second half of 2015 and throughout 2016.

Construction would suffer from higher costs in the short term but benefit over the medium term.

How can I avoid higher renovation costs?

If a large proportion of your building materials are sourced from overseas, it may be a good idea to reconsider your choice of supplier and favour local businesses. Supporting Australian businesses not only stimulates the Australian economy by creating jobs, it could also allow you to keep your home renovation costs down by 5-10%.

What does a lower Australian dollar mean for the property market?

What’s in store for the Australian dollar?

A weaker domestic currency may be here to stay, so what are experts tipping the currency will be in the near future?

A recent Bloomberg survey forecasts that the Australian dollar will remain around USD$0.75 through to the end of 2015 and may lift slightly to USD$0.77 in the final quarter of 2016.

The expert panel from our recent finder.com.au survey were divided about future prospects for the Australian dollar. The majority (76%) predicted that it will fall below USD$0.65 this cycle, but they were torn about when the currency will reach its lowest value.

With just 14% of respondents believing the dollar will hit its lowest value by the end of 2015, the majority (72%) expect this to happen in 2016. The remaining 14% believe that the dollar will fall to its lowest point beyond 2016.

Our money expert, Michelle Hutchison, says that the domestic currency is likely to depreciate further before it recovers.

“It’s daunting to think just last year in July 2014 the Australian dollar was buying almost USD$0.95 and we were trading at parity with the United States from June 2012 to May 2013. Fast forward to September 2015 and the overwhelming majority of experts (86%) in our latest survey predict the Aussie dollar will fall to USD$0.70 by the end of this calendar year, with over 2 in 5 believing it will plummet further – to USD$0.65 – by year’s end. This can have a significant knock-on effect for Australians, especially those heading overseas this summer.

“International money transfers and overseas property investment are also likely to be adversely affected,” says Hutchison. “Whether you’re sending money overseas, buying anything offshore, travelling abroad or have a home loan, keep track of both movements to the Aussie dollar and interest rates as next year is set to get tougher.”

While fluctuations in the Australian dollar may have an impact on the property market and renovation costs, it’s important to note that other economic factors also play a part, including levels of household debt, interest rates, unemployment, consumer confidence and industry regulations.

*This exchange rate was obtained in November 2015 and may be subject to fluctuation. Article source.

Economy Financial support during the COVID-19 pandemic
Economy What can we expect from the re-elected government?
Economy Interest rates – where are they headed?